Looking for places become really difficult when you have a lot of good options for the great pre wedding shoot locations and believe me, I have no intention of confusing our clients more by Mysuru but it is always good to have a variety from which you can select your ideal pre wedding shoot location. There are various Pre Wedding Shoot Locations in Mysuru are available.

Mysuru, which is formerly known as Mysore, is a city located in the state of Karnataka: one of the Indian state that is located in the South-West. It has many historical and mythological beliefs which makes it one of the prominent part of the country. The hereditary and Royal background of Mysuru makes it a wonderful place for the pre wedding shoots.

Mysuru is not only known for the deeds done in the past but it is carrying it’s legacy in the present times as well. The spices, the silk cloth and the sandalwood is famous in the old Devaraja Market from centuries.

Mysuru Palace or Mysore Palace is also known as the Ambavilas Palace which is situated in the middle of the city of Mysuru. It is a historical and the royal residence to the Wodeyar Dynasty which ruled the Kingdom from fifteenth century to the mid twentieth century.

The Palace is faced by the famous Chamundi Hills to the east and provides an stunning location for the pre wedding photographs. Mysuru which is also known as the “Land of Palaces” has seven of them among which this palace is the oldest and with the most popularity. 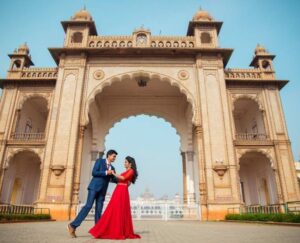 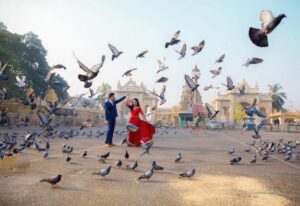 This palace was built on the land which was formerly occupied by a citadel and this is the reason why this palace is known as the Old Fort. This palace is built and rebuilt time and again. It’s architectural beauty is beyond comparison as it is decorated in the Indo-Saracenic architect and contains all the styles of Hindu, Rajput, Mughal and the Gothic.

There is a garden surrounding this beautiful palace and has an entrance gate with a arch holding the emblem of the Mysore Kingdom. There’s is something written in Sanskrit around the emblem that means “Never Terrified” portraying the power of the Emperors.

The history, the royalty and the nature together makes a power pack for the pre wedding shoots and the couples can feel free while capturing the symbol of the Mysuru City; Mysuru Palace.

Chamundi Hills are located to the east of Mysore and 13 km away from this palace city. The average elevation of the peaks is 3,300 ft. The hills also have some relations to the history and a great mythological background.

Providing drama and history in your pre wedding videos and photographs these hills, formerly known as Mahabalachala, are named after the Goddess Chamunda. A temple , Chamundeshwari Temple, is also built on the top of the hills and was last renovated in the year 1827.

Mysuru has gone through many name changes and originally believed to be the dynasty of the cruel Mahisasur who was killed in a ferocious battle by the Goddess Chamunda. This being the reason of a temple dedicated to the Goddess being situated on such a height.

The couples who wants blessing before their marriage and side by side an amazing panoramic view of the rocky hills, this is the right pre wedding shoot location for them. This is a beautiful location which will never fails to entertain the pre wedding shoot requirement.

It had not been always a tourist location but the fame and popularity of this places emerges in less than a week. It is now one of the most visited and appreciated tourist location in the city of Mysuru. These waters provide the serenity the couple asks for their pre wedding shoot.

One of the reasons of this beautiful place getting all the fame is also the Brindavan Gardens which is located near it. The setting sun is a treat to the eyes of the couple and a bonus for their pre wedding shoot background. 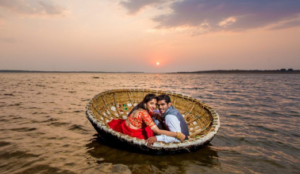 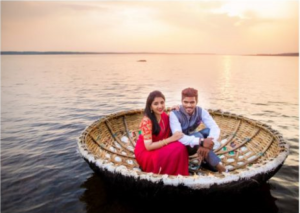 The another reason of the fame is the Venugopalaswamy Temple which is now relocated somewhere else stone by stone. It is believed that the 900 years old temple was originally located in the Kannambadi Village which was now submerged by this water reservoir. Every time the water level used to go down a large number of devotees could be seen here.

The other nearby attractions that can be used as the background of your pre wedding photographs is the Krishnarajasagara Dam, built across the river Kaveri. All these values and the attractive sites around makes KRS an important location for pre wedding shoot in the city of Palace.

This famous church which is situated in the city of Mysuru is a Catholic church that is the cathedral of the Mysuru’s Diocese, India. The full name of this church is Cathedral of St. Joseph and St. Philomena it also has an another name; St. Joseph’s Cathedral.

The church was built in the year of 1936 and the architecture style of this church is Neo Gothic by a Frenchman named Daly. This church is one the tallest church, Not just in India but in the Asia too. 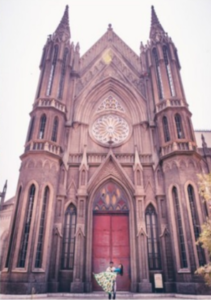 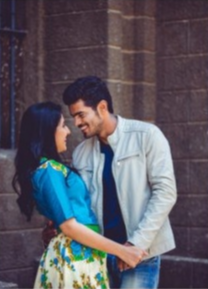 The architect and the fame are one of the main reasons for this place to be chosen as the pre wedding location. This architectural style for the church was inspired by the Cologne Cathedral in Germany.

A church was built by King Mummadi Krishnaraja Wodeyar at this same place in 1843. When the foundation stone of the present church was laid down in 1933, the inscription of the church states “this church is built 1843 years after the incarnation of Jesus Christ, the Enlightenment of the World, as man”.

By now you must have understood the relevance of this city in the history and the mythology. The various locations of Mysuru is well known and appreciated by the couples who visit there. The different architectural sites and the wonders of nature makes Mysuru a Pre Wedding Pack location. For the location information click on Mysuru, Karnataka.