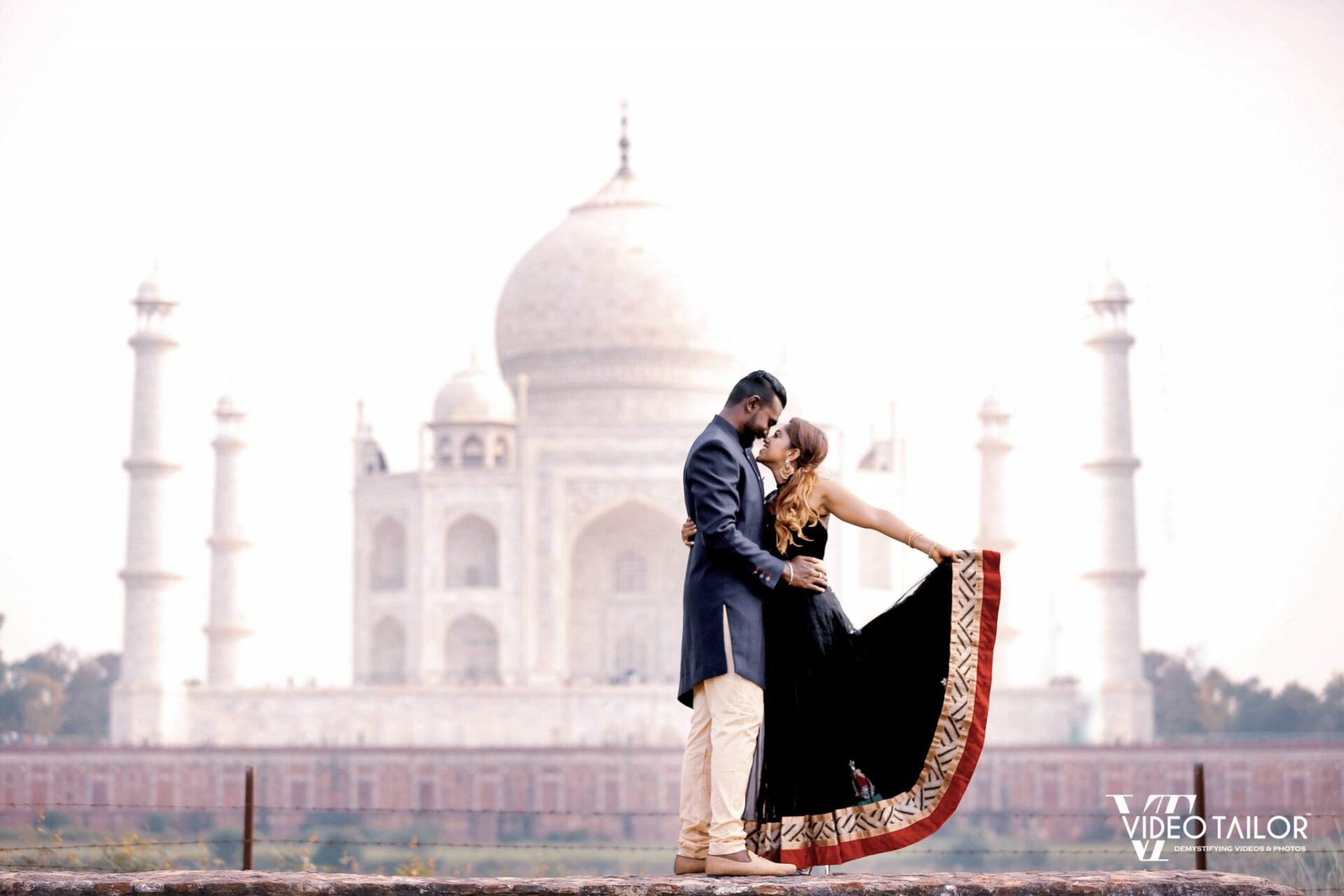 You might have heard this quote sometimes that “Love is in the air” and sometimes people can not recognize the meaning of it. Taj Mahal is one of the places where you will find these words coming alive. The Taj Mahal which literally means “Crown of the Palace” has the quality that can beat all the other mausoleums. It is made up of ivory-white marble and is situated on the band of river Yamuna in the city of Agra, India.

The Taj Mahal is a symbol of love, a love that was once shared between a husband and wife og high esteem. The mausoleum was commissioned by the Emperor of Mughals; Shah Jahan, so to house the tomb of his beloved and favourite wife; Mumtaz Mahal. Hence, making it a place worth for the pre wedding shoots of the couples. It allows them to feel the love that has travelled through ages, from the early 17th century to the present.

Taj Mahal was commissioned to be built in the year of 1632. Travelling through time the place has become an Indian heritage given by the famous Mughal Emperor; Shah Jahan. It is evident that India is a culturally diverse nation and a mixture of many historical variations. Taj Mahal was also called as the “Jewel of Muslim art in India”. To have a pre wedding shoot at Taj Mahal is not just complementing the beautiful sight but also having the blessing on the couples from the souls of the lovely husband and wife who had marked their love forever.

The Taj Mahal is surrounded  by many other red stoned buildings and walls and tombs. There is also a mosque and it is made up of white marble.The area around the mausoleum is about 300 metres square and there it is set by the Mughal Garden in the style of the Char Bagh. It also has a pool between the Mausoleum and the gateway. The pool reflects the Taj Mahal. All of these additional things adds on to the beauty of the white marbled mausoleum making it the best mausoleum for the pre wedding photographs.

POINTS NOT IN FAVOUR

Location for the pre wedding shoot is a major element and has to be taken care of. Taj Mahal is located in the City of Agra and thus consumes the travelling time and also the journey can make the couple feel tired. The tiredness and the time consumed by the travelling leads the couple to at least take a two day time for the shoot because shooting on the same day of travelling will be in done in a rush or reduces the amount of satisfaction that is required by the couple

Backdrops make the pre wedding shoots worth the while. Even by having number of places, the shoot cannot be done on all the places. The limit will be bounded as in getting the perfect shots. Except the white marble mausoleum and the gardens there is not much to be covered, making it a little bit like the Humayun’s Tomb. Lack of backdrops gives rise to problems like variety of styles and also makes the traveling sometimes unworthy of the pre wedding photos.

Props are like the jewellery, it puts an extra effort to the pre wedding photographs and make them look more attractive and classy rich with the beauty. The unfortunate part is that the props are not allowed in the Taj Mahal premises, though you can carry an umbrella or these small things like flash cards that can be carried in the hands or in the bags but not the bigger props. It does not affect much but it will be better if they were allowed.

Taj Mahal also lacks the convenience of changing rooms making it difficult for the couple to change their outfits because if they want to change their dresses they have to go back to the hotels where they are staying. That will consume their time furthermore and will bring a long pause in between the photoshoot. Thus it is one of the big problems because else you are left with just one attire and have to complete your shoot in that one outfit which you have to choose carefully according to the monument.

The unavailability of the changing rooms brings up the problem of the variety in looks and outfit. The couple will not be able to change their dresses or have to rush to their hotel and come back with another look. This will often leave the couple to choose one single style of dress and that has to be chosen carefully keeping in mind the colour that will be best suited with the white marble mausoleum, the red brown walls, the garden and the pool. Sometimes wrong choices will leave a hole in the completed output and lack satisfaction in the couple’s desires.

Being a public place Taj Mahal lacks privacy that needs to be provided to the couple and their camera person. It leads to the wait for perfect shots or else the couple has to reach to the Taj Mahal for early morning shoots when the crowd is comparatively less. The waiting and clicking process can be time taking and tiring as well. It can reduces the excitement and gives birth to restlessness and rush. The various things can make the shoot pressurized.

Drones camera are not allowed at Taj Mahal as it comes under UNESCO World Heritage Sites rules and regulations. This  reduces the the angles options from which the photographs can be taken and turns out one another issue that has to be faced at Taj Mahal.

The overall review takes all the positives and the negatives in the consideration. We would say that it is a beautiful location for the pre wedding shoot and the outdoor location may gives you the management problem of time but it will definitely worth it because you will get some time to explore the city with your fiancé.
BY VIDEOTAILOR TEAM 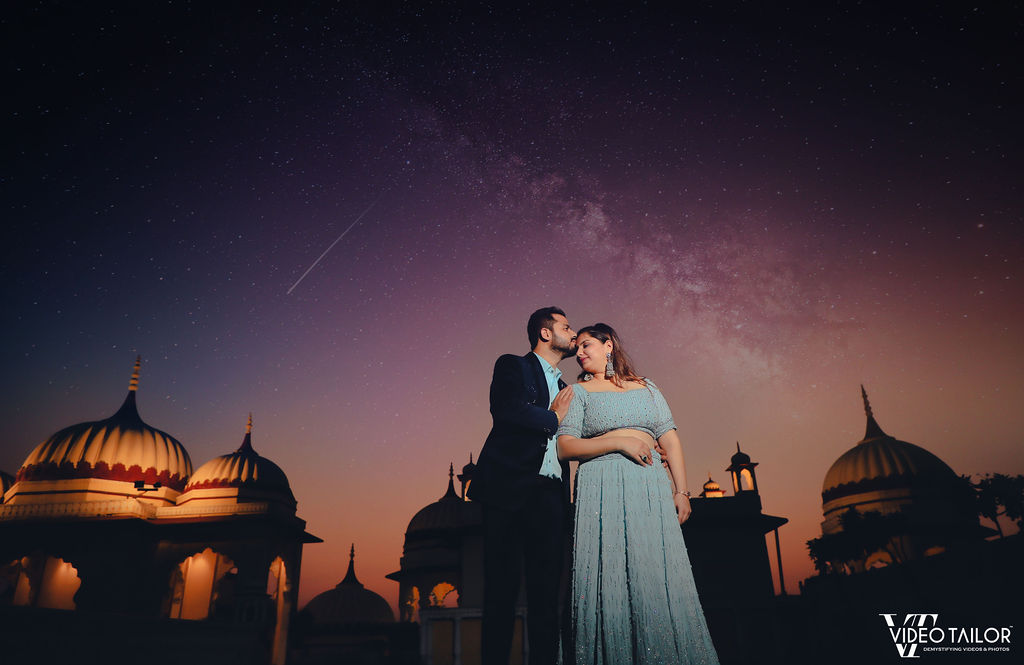 VIDEOTAILOR's
PREWEDDINGS
Perfect blend of creativity, uniqueness, and execution is what makes the pre wedding shoot stand out from the others. We have shot in multiple locations Rishikesh, Leh, London, Dubai, HongKong, Kashmir, etc,. Our team is well versed with all the unique and hidden location across cities and countries.
Our team excels in both candid and natural and conceptual pre weddings. We have re created Bollywood songs and the various themes for our clients! Providing all the help required to make your pre wedding shoot memorable.
VIEW MORE
Total: